The mathematical equations form a small-scale ODE model as presented for the lane change manoeuvre.

The vehicle dynamics are based on a single-track model, derived under the simplifying assumption that rolling and pitching of the car body can be neglected. Consequentially, only a single front and rear wheel is modeled, located in the virtual center of the original two wheels. Motion of the car body is considered on the horizontal plane only.

Four controls represent the driver's choice on steering and velocity. We denote with

controls the total braking force, while the accelerator pedal position

is translated into an accelerating force. Finally, the selected gear

almost everywhere the mixed-integer optimal control problem is given by 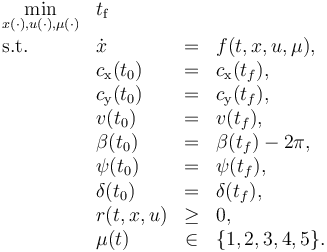