This site describes a Fuller's problem variant with no terminal constraints and additional Mayer term for penalizing deviation from given reference values. Furthermore, this variant comprises four binary controls instead of only one control.

almost everywhere the mixed-integer optimal control problem is given by 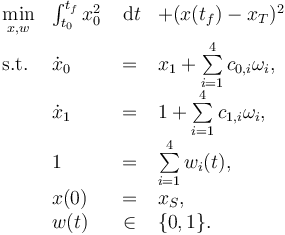 If the problem is relaxed, i.e., we demand that

be in the continuous interval

instead of the binary choice

, the optimal solution can be determined by means of direct optimal control.

The optimal objective value of the relaxed problem with

. The objective value of the binary controls obtained by Combinatorial Integral Approimation (CIA) is