The Electric car problem tries to find an optimal driving policy for an electric car. The goal is to use minimal energy to finish a given distance. As the car can be driven in two discrete modes, which either cause acceleration (and thereby consumption of energy) or the recharging of the battery, the control variable

is supposed to be integer. Additionally the model for the electric car itself contains nonlinearities. 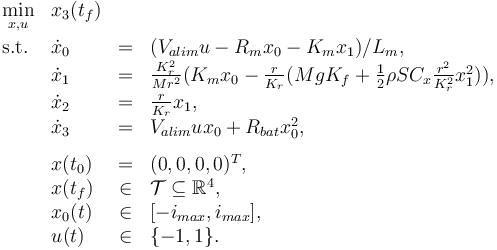 Here the four differential states stand for the electrical current (

), and the consumed energy (

is just a reformulation of the Lagrange-type objective function tracking the used energy over time.

We look at the particular instance of our problem with

, in which the car needs to cover 100m in 10s. Figure 1 shows a plot of the differential states of the optimal trajectory of the relaxed problem (i.e.

being the number of time discretization points. The current

increases to its maximal value of 150A, stays there for a certain time, decreases on its minimal value of -150A, stays on this value and eventually increases slightly. This behavior corresponds to the different arcs bang, path-constrained, singular, path-constrained, bang and can be observed also in Figure 2. It shows the corresponding switching function and the optimal control. Note that the plots show data from the solution with the indirect approach.

Applying the sum up rounding strategy results in an integer-feasible chattering solution. The resulting primal states are shown in Figure 3. One observes the high-frequency zig-zagging of the current

that results from the fast switches in the control.

Model descriptions are available in

There are several alternative formulations and variants of the above problem, in particular